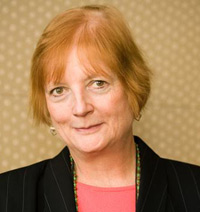 Jean Frost has a record of community involvement since she moved to South Los Angeles in 1978. Her journey here began when she was elected as the first PAC (Project Area Committee) Secretary to advise the Community Redevelopment Agency (CRA) on how to implement programs to improve the area (then called Adams-Normandie 4321.)

She has been a community activist and resident of South Los Angeles for over three decades; an Executive for twenty years at two national labor Unions, AFTRA and DGA; she is the University Park HPOZ Board Chair and serves as a community member position on Board. Professionally she has been a writer, casting director, theater director and union executive.

Jean’s positions have included both appointed and elected service to the University Park Community, in furtherance of community improvement, land use, and historic preservation. Ever since (then) Councilwoman Gloria Molina appointed her to MASH (More Advocates for Safe Homes) to represent the University Park Area, she has worked to enhance the quality of life in neighborhoods, and she demands better City services to the community. She strongly believes good planning begins at the grass roots level and hopes to serve NANDC and work with all of her Board members to achieve a strong and effective neighborhood voice in the planning process.